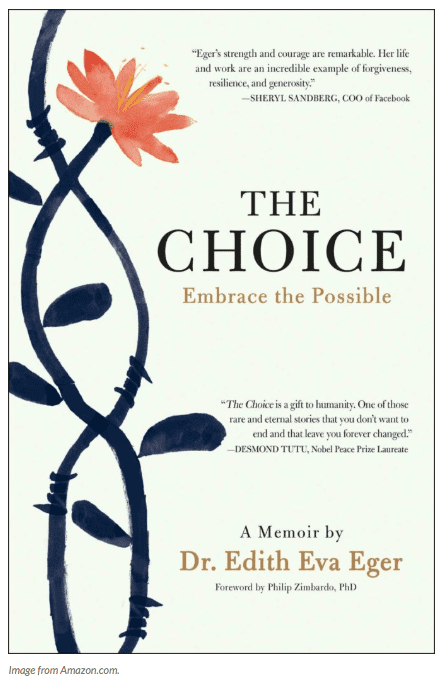 The Choice by Dr. Edith Eva Eger is an incredibly empowering book on trauma recovery, written by a woman who has sometimes been nicknamed “the Anne Frank who didn’t die.”

The pain of Dr. Eger’s story is hard to fathom. Nearly her entire family, all Hungarian Jews, died in Auschwitz when she was 16 years old. Dr. Eger was an accomplished ballerina and was once made to dance before Josef Mengele, the SS doctor who was nicknamed “Angel of Death” for torturing Auschwitz inmates in the name of scientific observation. He gave her a loaf of rye bread after she finished dancing, which she tore up and shared with her bunkmates.

The Nazis transferred prisoners from Auschwitz to Gunskirchen near the end of the war. Dr. Eger remembers being made to ride on top of the train cars full of ammunition as a kind of human shield. By the time she and Magda were marched into Gunskirchen, she weighed about seventy pounds.

The girls were rescued when an American GI pulled her from a pile of corpses, feeding her M&Ms one at a time. Her sister Magda also survived and they eventually made their way back to their home where, miraculously, their sister Klara had survived the war. The reunion is as painful and beautiful as you would imagine. (A blue-eyed blonde woman, she had passed as a gentile, living part of the time as a novice in a convent.)

What sets Dr. Eger’s book apart from other Holocaust memoirs is best summed up in the forward, written by her colleague and friend Philip Zimbardo, PhD.

“…[H]er book is so much more than another Shoah memoir, as important as such stories are for remembering the past. Her goal is nothing less than to help each of us to escape the prisons of our own minds….it is Edie’s mission to help us realize that just as we can act as our own jailers, we can also be our own liberators.”

The book is divided into four sections: Prison, Escape, Freedom, and Healing. The last two sections describe how Dr. Eger eventually stops running from her past and embraces it. She is given a copy of “Man’s Search for Meaning” by Victor Frankl in her undergraduate studies and through him, she eventually finds the permission and the words to speak her truth. Frankl became a mentor and friend to Dr. Eger until he died in 1997.

Dr. Eger becomes a psychologist and begins to practice, finding pieces of her own trauma in her patients. To the spouses in crisis, to the girl with eating disorders, to the Vietnam veteran with PTSD. And as she gives them permission to heal, she gives permission to herself as well.

In the final section of the book, Dr. Eger delivers an address in Berghopf, Hitler’s private palace. She tells the crowd:

“Every beating, bombing, and selection line, every death, every column of smoke pushing skyward, every moment of terror when I thought it was the end–these live on in me, in my memories and my nightmares…The past isn’t gone…it lives on in me. But so does the perspective it has afforded me: that I lived to see liberation because I kept hope alive in my heart. That I lived to see freedom because I learned to forgive.”

As Dr. Eger writes, “Maybe to heal isn’t to erase the scar, or even to make the scar. To heal is to cherish the wound.” This book is singular because of how Dr. Eger doesn’t once diminish the experiences of those who haven’t suffered as she suffered. She finds the commonality in all our pain, and gives people tools to own their part in their healing.

Read this book. And if you see pieces of yourself in Dr. Eger’s journey, give me a call. Post traumatic stress disorder (PTSD) is a common problem with trauma and can be a serious interruption of your life.