WHY AM I HAVING NIGHTMARES?

Hope Mental Health Blog WHY AM I HAVING NIGHTMARES? 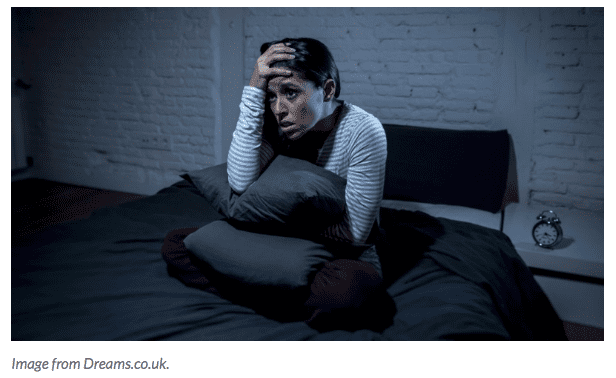 Nightmares tend to crop up when we’re stressed, anxious, depressed, on certain medications, or when our sleep is being consistently interrupted (hello, parents of a newborn!). Occasional nightmares are normal, but consistent nightmares can be indicative of a larger problem.

The most common mental health disorder associated with nightmares is Post Traumatic Stress Disorder (PTSD), whether it be from traumatic life events or military service. (In fact, frequent nightmares have become a criteria used to diagnose PTSD.)

What’s happening in your brain?

REM sleep signals begin with the pons, which is an area at the base of the brain. The pons shuts off neurons in the spinal cord to suspend movement, all the while sending signals to the thalamus, which then boomerangs them to the cerebral cortex because that’s where the brain learns and organizes information.

REM sleep isn’t continuous–it’s a cycle that repeats through the night, only making up 20 percent of your total slumber–but it is in REM sleep that nearly all vivid dreaming takes place.

When do nightmares become a problem?

The occasional nightmare is normal, but here are some symptoms that may be indicative of a nightmare disorder:

What can I do about recurring nightmares?

Name your fear. Identifying and managing the biggest stresses in your life can go a long way toward your peace of mind. Ask yourself: what are your biggest worries? What can you do about them right now? Are you willing to make those changes to address the problem?

Evaluate your lifestyle. What you take into your body can affect your quality of sleep. The National Sleep Foundation discourages drinking, smoking, or eating large meals late in the day. They also caution against ingesting large sources of caffeine as it acts as a stimulant for your brain. The highest sources of caffeine are in energy drinks, coffee, chocolate, diet drugs, soft drinks, non-herbal teas and some pain relievers, such as Excedrine.

Rewrite the ending. The Harvard neurobiology article describes a treatment called image rehearsal therapy (IRT). It’s a cognitive therapy where individuals with recurring nightmares write it out, then give it a positive ending. They rehearse this rewritten version before going to sleep.

See an APRN, doctor or specialist. If you believe you are having medication-induced nightmares, you may need the dosage adjusted. If you have persistent nightmares or sleep terrors, you may need to have a sleep study done to identify a problem.

If you think your nightmares are linked to anxiety, depression or past trauma, counseling can be helpful in identifying and managing those fears. Please let me know if I can help you.